She is the ultimate Errol survivalist. As the younger sister, there is not one moment in her life that was not filled with Errol. It is a testament to her strength that she somehow got to adulthood in one piece.

Actually I am amazed this was never a result.

But she is also Errol’s biggest cheerleader. 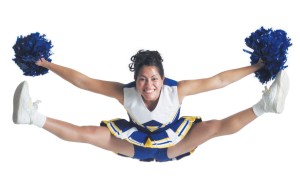 She will listen to all of his music. She will promote him. She will write his grant applications for him and press releases (ie all the stuff that artists don’t want to do). She sends him presents when she sees a Totoro thing he might like. She is, frankly, one of the best siblings anyone could ask for.

And what does Errol do to repay her for her kindness?

He calls her a loser. 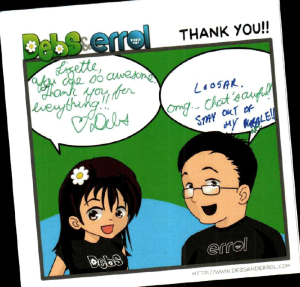 As evidenced by his thankyou card to her.

He tells her she looks old. 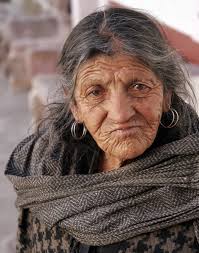 This is not Lizette.

He refuses to draw her in the Debs and Errol comic. 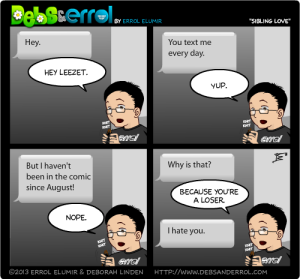 And then calls her a loser again.

Basically, he is a jerky jerky jerk face. And OH sure, Lizette laughs but I think that’s YEARS of stockholme syndrome working against her.

You know who else had stockholme? Belle.

It’s a wonder that the two of them came from the same gene pool considering how vastly different they are. He’s an annoying nerdy extrovert. She’s an empathetic non-nerdy introvert. 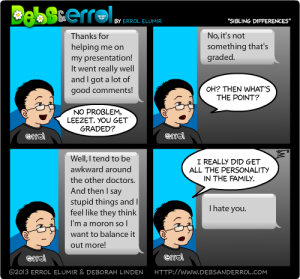 BUT she is awesome! She’s a super smart doctor lady and she is funny and empathetic and she actually likes writing grants (an artist’s dream). AND most importantly! She loves Sherlock!

And she deserves far better treatment than her jerk brother gives her. And I can’t think of anything better than to send her Benedict Cumberbatch. Which I totally did. I certainly did not put this in MS Paint extremely crappily. No siree. Enjoy your new life Lizette…with an…even bigger jerk…hmmmm…ah well, Errol gave her lots of practice. 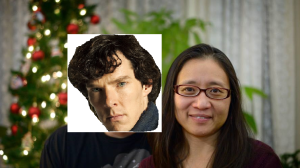 Posted on March 9, 2014, in My Neighbour Errol and tagged leezet, my neighbour errol. Bookmark the permalink. Leave a comment.