I don’t consider myself a bitter or jealous person. I don’t hold grudges. I’m happy for my friends when they have awesome news. Oh, sure there are certain things in life that I would like to be easier. Money, time, a man servant to do my bidding…. 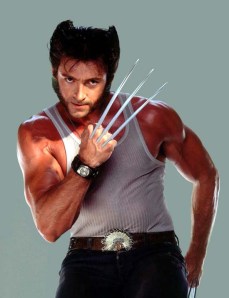 He could chop all my vegetables!

But still, I like to think that I’m content with what I have and that I don’t spend my days embittered about all the things I don’t have.

But then Errol got a new job. At Disneyland. 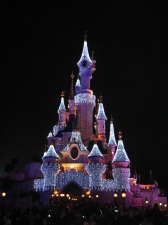 Okay, it’s not the real Disneyland. I just call it Disneyland. Why do I call it that? Well, go to the photographic evidence.

For instance, take a look at this photo of Errol and his coworker (who is actually Alex from geek band Nerds With Guitars! If you haven’t listened to their stuff, you should). 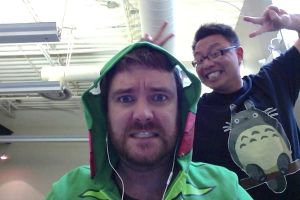 Note the Totoro shirt and Kermit hoodie. Do you know what clothing I am not allowed to wear at work? A totoro shirt or a kermit the frog hoodie. I get uncomfortable office shirts.

Then there’s the free pizza and beer they get every other Friday. 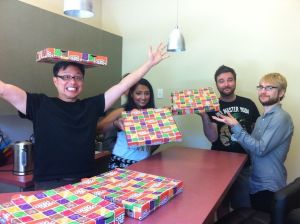 Errol does not even drink beer…I don’t really either, but if it’s free I do! We do not get beer at my job. We occasionally get awkward office parties in which everyone sits around drinking juice and realizing that we don’t have anything to talk about other than work. You would think Errol would appreciate this, but he only complains if they forget the wings.

Of course, when his employers are not throwing free meals at them, the employees have their pick of the litter for lunches. 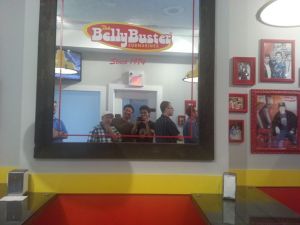 You see, Disneyland is a magic place where you have over 30 restaurants and shops to choose from when you are peckish. Belly Busters for instance, is a sub shop. They have a bacon sub. A BACON SUB. I have a cafe that is the only close thing to my office. They have one good menu item: the spicy chicken. And you have to rush if you want to get at it before the mob descends.

But if they happen to skip lunch altogether, there’s probably a cake waiting for them. 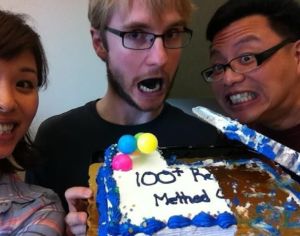 The reason for the cake? They got a hundred reviews of…something, I don’t know, a product. Which meant their bosses bought them a cake. When do I get cake? When someone quits usually. Sometimes my clients will throw us an offering but for the most part I have only the candy jar to keep me company.

Of course it’s not all food parties at work. Sometimes Errol will just hang off load bearing columns. 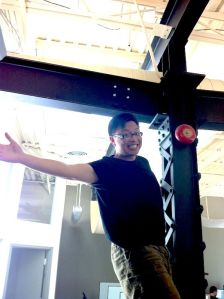 Or have cardboard lightsaber tube fights. 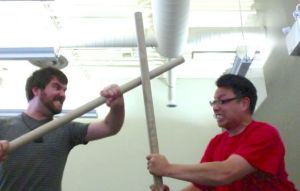 Or be threatened by crazy coworkers. 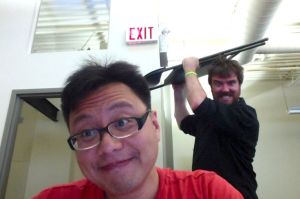 Truth? I think these two need a sitcom. I also think Alex and I share the distinction of “dealing with Errol every day”

Do you know what I’m not allowed to do at work? Hang off load bearing columns. Or have cardboard lightsaber tube fights. Or threaten my coworkers with chairs. I am allowed to sit and listen to the Easy Listening station. Which by the way, is NOT easy to listen to at all!

And in case you’re curious, not only are there more photos, but you can view them too! On the company’s OFFICIAL PINTEREST PAGE! That ERROL created! That’s right, it’s not like he’s taking photos at work and only showing his friends. No no, the CEO is completely aware and just fine with the shenanigans!

In fact, you might also be wondering if in all that fun, does Errol actually do ANY work?

Why,  yes, yes he does. He records training videos. And I’m sure you’re thinking “Wow, those sound all official I’m sure Errol is forced to be completely serious and professional at all times”. Well, here’s one of his videos. Take special note of the funny phone voice he uses, the multiple “HA HA’s!” and the use of such words like “handy dandy”.

Now before you get all “But Manda, wouldn’t you be HAPPY that your friend got a job after four months of unemployment?” And my answer is, yes, yes I am. Not only did he get a new job, he got one that he enjoys and where he is actually encouraged to be himself in his videos!

And hey, it’s great to have actually interesting training videos. Have you done video tutorials? They’re usually dull as clay.

But imagine you’re me, sitting at your desk in a job you have now been at for seven years. A job that you are not particularly satisfied with or is particularly fun and only have because it pays the bills so you can do fun creative things. A job where your co-workers sit quietly at their desks and you get phone calls from frustrated rich people who always want more money for the dog spas. 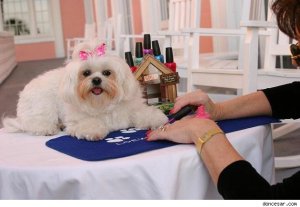 And then you get these photos. Photos of happy people at work, eating pizza, starting up pinterest accounts, having office supply fights. Every. Single. Day.

But even then, I was able to laugh it off. Until yesterday. There I was, sitting at my desk, trying to concentrate and stay awake in my slightly too warm office, when Errol sends me the following video.

Looks stupid, doesn’t it? In fact, it IS stupid. It’s just a funny little moment! Not even that funny really! A rubber magnetic lobster on a microwave. Nothing at all!

And yet…that was my Frank Grimes moment.

Suddenly that was it. In a single moment all of the bitterness of the world flowed through me. I hated that lobster. I hated the way it wiggled. I hated all the joy it brought to others that it denied me. I hated the microwave it sat on with its Star Wars stickers.

To me, in that moment, that lobster represented everything that I didn’t have in life.

I don’t have a fun job. Why? Lobster. 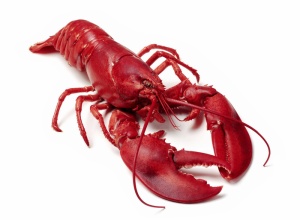 I struggle for money. Why? Lobster. 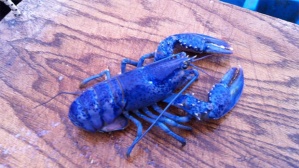 I don’t have a boyfriend. Why? Lobster. 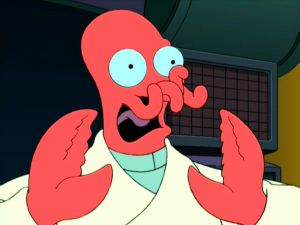 My apartment is cluttered. Because of that darned lobster! Tears welled up in my eyes. My breath shortened. I ranted and raged to Errol over G-chat.

I told Errol all of this over Gchat. His response?

“I’m trying not to laugh…I really am.” 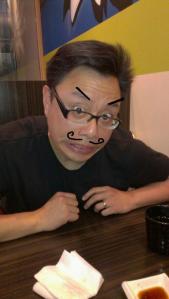 Yup. That’s about what he looked like when he said it.

Of course I knew it was ridiculous. And illogical. But I cared not. That lobster was the reason I did not get to work at Disneyland.

After a few cookies though I got to thinking. One of Errol’s coworkers was always surprised that he smiled at them when entering the office everyday. And only then did it occur to me that maybe it wasn’t just Errol who worked at Disneyland, maybe Errol brings Disneyland with him.

…Wow, that looks 200% cheesier than I had imagined. Still, it has a ring of truth to it. Maybe if I changed my attitude, joked around more and tried to enjoy my work I would be able to feel like it was Disneyland too.

Or I could kill the lobster….I’m going to kill that lobster.

Posted on August 17, 2013, in My Neighbour Errol and tagged disneyland, my neighbour errol. Bookmark the permalink. 6 Comments.