← Musings of a Straight Man
Disobedience →

So there’s this game called Terraria. 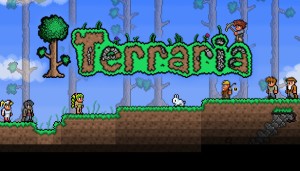 It’s basically a 2D version of Minecraft. You create a character for yourself and then you are plopped down into a randomized world, full of trees and bunnies and plants and caves and various things that want to kill you.

Including unicorns. yes, the unicorns will kill you. I hate them.

Your objectives are as follows: explore and build. That’s it. There are bosses to defeat. There are different phases the world goes through. But other than that you are free to do as you please. Build enormous houses, explore subterranean caves, fight demonic beings that plague the world!

Errol is slightly obsessed with it. And by slightly, I mean very. And by very, I mean if it wasn’t for the fact that he had a family who occasionally require feeding, love and attention and a body that requires daily maintenance to keep functioning for at least basic mouse control he might very well spend all his waking hours mining his way through a virtual world.

If this comes to pass…you can say goodbye to productive Errol….

I play as well but sandbox games aren’t really my greatest strength and my presence is more tolerated than it is encouraged. I’m not good at crafting. My building creativity doesn’t extend beyond box-like houses. I’m certainly no good in a fight.

The only thing I can really provide is someone to poke fun at while I scream and panic at all the things killing me because it never occurs to me to make better weapons or armour. But still, it’s a fun, addictive time, especially with friends.

For instance, he has made an entire building room devoted solely for the storage of all the dirt and stone he collects. Do you NEED to collect the dirt? No, no you do not. It’s infinite. People often just throw it out. Not him. He collects it. All of it.

All of this. Dirt.

But it goes beyond just collecting. He has to organize it. Every item is categorized and filed away in countless barrels. He took out an entire forest in order to make the sheer number of barrels necessary to keep up his insane system. It’s like trying to navigate the dewey decimal system, except instead of a wealth of knowledge you just get a barrel full of cobwebs or twenty different types of seeds.

He also, in our first world, decided to mine a gigantic column 200 feet wide out of the centre of the earth. He spent days mindlessly drilling it out. And then he filled it with water. Why? I couldn’t seem to get an answer other than “Because it’s awesome”.

There it is. Yup. It’s as pointless as it looks.

One day I entered the game, intent on going over to the ocean to fight some sharks because I could use their fins for an kick-face merman suit. Only when, I got there, all I found was a sandy desert.

This is Errol’s fault.

Confused, I asked Errol. The conversation went as follows:

Me: WHERE DID THE OCEAN GO?!

Errol: Oh, I drained it!

Me: You DRAINED an ocean?!

Errol: Ya, it took a long time.

Errol: Because it’s an ocean, and it’s HUGE.

Me: No, not why did it take forever to drain, why did you do it?! All the sharks are dead! You destroyed an entire ecosystem!

Errol: Because I wanted a moat for my sky fortress!

Me: For what purpose?! IT’S A SKY FORTRESS!

Me: (face palm) You are a scourge on this environment.

It went on like this for some time. There was the sky fortress. The slow hollowing out of the entire earth. I asked him if he wanted to do something other than mine…like fight monsters, or explore a dungeon, or help me craft a new sword.

This is my sword right now! I…did not make it…

He did not, and continued to mine.

Why does he feel the need to mine for six hours at a time? What POSSIBLE thought process does he go through to reach conclusions like “A 200 foot wide foot hole in the ground is absolutely necessary”. I decided not to contemplate such impossible questions and contented myself with derping around the countryside.

But then one day I was exploring and didn’t know where Errol was. Well, I never knew where he was really, but this time I decided to go and look for him. Why? Who knows. Perhaps I was bored. Perhaps I was lonely.

There I was, leaping from cavern to cavern when I heard the familiar “bwwrrr-bwwrrr-BWWWRRR” of Errol’s drill. I couldn’t see him anywhere though. Suddenly I found myself jumping into a giant lake of lava. Not just jumping into an insane pool of lava, but getting rained on FROM ABOVE by a cascade of lava drops.

I yelled in panic, trying to hop my way out of it, but the funny thing about lava is that…it’s freaking lava, and soon I was dead. 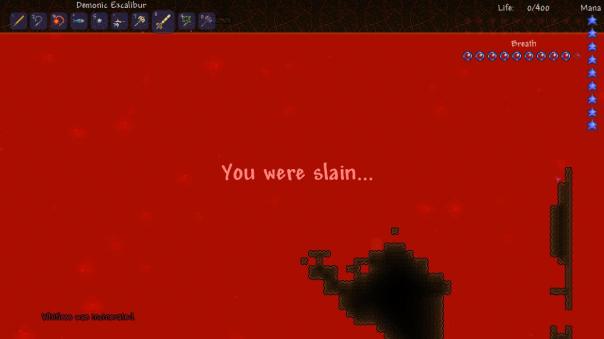 The conversation went as follows:

Errol: What? Where are you?

Me: Right here! IN A LAKE OF LAVA!

Errol: Why did you go there? That was stupid.

Me: Because I was looking for you! Why are you making LAVA rain from the CEILING?!

Me:….WHY?! WHAT DO YOU NEED A LAVA LAKE DEEP UNDERGROUND FOR?!

Errol: Because I like to watch the things burn!

There was this episode of the original Batman series that I remember. In it, the Joker replaced the entire world’s water supply with lime Jello. And then the Penguin used the opportunity to seduce this girl because she was so thirsty she would gladly accept a glass of wine and…okay, I’m getting off track, but it was a weird episode…and for some reason I remember it…

The point is, it finally dawned on me. Errol is just like them. He’s a campy supervillain.

He kills the environment without a second thought. He builds a sky fortress. He drains the ocean for a moat. He hatches pointless schemes that don’t really seem to have a point. Why? Because evil, that’s why! Supervillains plans never make any sense! He might as well start putting lasers on sharks or breeding giant caterpillars or taking away the world’s oxygen to see what would happen. 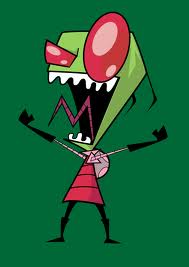 This is not an exaggeration.

And suddenly, I started to see the game from the other point of view. All those animals and magical creatures attacking us are actually the resistance, desperately trying to protect their land from the evil presence that has come to live there, who will gut their land of resources before moving on to the next.

I tried to tell Errol this. He laughed and continued to drill deep into the earth, mindlessly waking up demons as he went.

And then he TWIRLS HIS MUSTACHE!

It wouldn’t be so bad except that now he’s been training his daughter who is a class of her own. Imagine Errol making even less sense and being more chaotic. That is Ekko. She will walk up to me, silently, no words at all, and just hand me random items from her inventory. Why? I don’t know. She’s a bag lady. I don’t have a choice either. As soon as someone hands you an item you pick it up automatically!

Are there tons of barrels around to use? There sure are. But she won’t touch them. Instead, I’m her personal storage space. They aren’t even useful items!  They’re things like rotten meat chunks or seeds or cobwebs. What am I supposed to do with those?!

And then there’s her house. Random rooms in random places, multi-coloured bricks and dart-traps hiding EVERYWHERE. Every step is an intimate encounter with death. She is either going to be a very creative architect or the guy from Saw.

The rotten chunks come from the corrupted land. Errol is currently trying to eradicate it.

I fear for the people and creatures of Terraria. Soon there will be an expansion to the game, and even more for Errol to destroy. Sometimes I wonder if I should stick up for them, change the game, declare war.

Then I think that Myst is a way better game, and play that instead. Good luck, Terraria, you’ll need it.

Posted on July 17, 2013, in My Neighbour Errol and tagged ERROL, manda, my neighbour errol, terraria. Bookmark the permalink. 5 Comments.

← Musings of a Straight Man
Disobedience →