That isn’t to say that I haven’t been working out. I have been. But it’s been rather sporadic with little results (other than the fact that I can run 5km now without dying, huzzah!).

BUT I want to start these little progress journals up again. Why? Well, I bit the bullet and decided to start up with a Boot Camp class. Boot Camp is hard. Which makes sense because why call it Boot Camp otherwise? 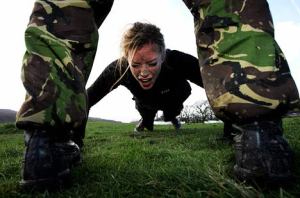 So I figured why not document this arduous process so that all of you, the people, can get amusement from my pain? So here we go:

Boot Camp. It’s Boot Camp. So far I have done both an Interval/Metabolic workout and a Circuit workout. Both are intense. The interval workout is usually a warm-up, then twenty seconds of some excruciating exercise (I’m looking at you, jumping jack pushups!) followed by 7 seconds of wishing for death on repeat for about 45 minutes. 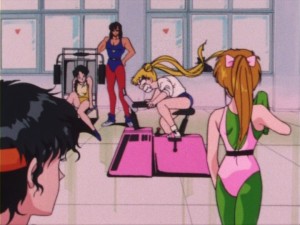 My desperation levels though about match this

The circuit training is another warm-up, then moving to different stations around the room like punching bag, chin-up station (surprisingly fun if not difficult), push-up station (blurgh), some weird weight thing you swing around and “The Ladder” (jumping in out and out of the rungs of a ladder) with a two minute break in the middle so you can wish for death.

I always like doing fake speed skating. And the chin-up station can be surprisingly fun…most of that is because you are hanging in a giant elastic band. Don’t ask me why, I love it. The punching bag is also one of my favourites. And I am slowly but teaching that bag who’s boss. One tiny punch at a time.

The Not So Fun Stuff:

I will always hate push-ups. Always. My weak little wrists can barely stand it. And anything with jumping. I am not the strongest jumper, so any movement that requires more than 6cm off the ground has me almost collapsing after ten seconds.

I am also on a meal plan! Sadly, many of the meals on it are things that are either too pricey for me (weird ingredients) or require a blender. So I am making do as best I can and at the very least, I have changed my diet significantly. A lot more green veggies and fruit, a lot less rice and bread. And it’s made me very aware of what I consume, so that’s a plus! If I cheat, I try to limit it to once a week, figuring that it’s better to cheat a little bit every few days rather than binge when the agony gets to be too much.

Percent I want to Murder the Instructor:

Only 30%. Unlike Jillian Michaels, he’s not on a screen and so is a lot harder to hate. His name is Rob Gordy and he seems pretty groovy so far.

How Much My Body Hates Me:

A lot. I’d say about 85% of my body hates me. If it’s not the waves of nausea I’ll feel during the workouts themselves, it’s the sore muscles who are suddenly being made to work overtime. It doesn’t help that I haven’t quite figured out how much I should eat before a workout or WHEN I should eat it so I don’t feel like fainting. Most of the workouts take place over my normal dinner time so it’s been a tough go so far.

As much as it hurts the next day, the sore muscles always give me some satisfaction that it was a job well done. And it feels good to be able to say “I’m trying” rather than complain endlessly about how out of shape I am.

The Results so Far:

Sadly, I have only been to 3 sessions in the 12 days I’ve been a part of the program. This isn’t so much due to laziness as it is the fact that I got sick with a serious sinus cold about five days after I joined. My sinuses got hit really hard and have been trying to explode out of my head for the last week or so. Today is the first day that my face doesn’t feel like somebody shoved a dirty towel inside it. 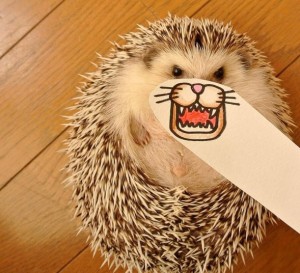 When I went last night, my body was clearly still recovering its energy from the week long battle with my sinus cavities and it was a pretty dismal affair.

Still it’s good to have someone who actually follows up with you and holds you accountable for your progress. Like the gym, most people don’t actually care what you look like in boot camp. They’re too concerned with themselves. Hopefully though it can only get better from here!

Posted on September 18, 2014, in ramblings and tagged boot camp. Bookmark the permalink. 1 Comment.