Have you ever been to a friend’s house with a particularly hyper dog? You know the type. Your finger barely hovers over the doorbell before a barrage of barking comes hurtling towards you with crazy spasms of joy.

Let’s face it…this is an excuse to post pictures of crazy dogs.

You try to calm him down, but he can barely contain the excitement for his new found friend and the only thing that will keep him from mauling you with love is the NEXT person that happens to come to the door.

Or he is offered meat…

This is what Errol is like in Group Chat.

Every day Errol likes to say Good Morning to his friends. And by good morning, I mean he summons us to a google chat where he proceeds to explode in an all caps frenzy.

There I will be, at work, staring glassy eyed at my screen when all of a sudden a large “GROUP CHAT ENTERED” pops up in my G-mail, and the Errol excitement begins. That’s the funny thing about g-chat, too. You don’t actually get a choice as to whether you participate (unless it’s your phone). If Errol chooses you to be his new chat friend, you’re conscripted.

Us preparing for a chat room.

This tradition is only a few weeks old now. Why it started, I’m not entirely certain. Perhaps it was to make chatting more efficient. Perhaps it was Errol’s inability to not be social at any point in the day. Perhaps it was because Errol enjoyed our extreme discomfort and awkwardness when faced with his joyful joy.

This is about most of our looks I’m pretty sure…

And much like that yappy dog, Errol’s exuberance at seeing you in a chat room is entirely genuine. Every single time it’s as though he hasn’t seen you in four years.

Often, he needs a full ten minutes to calm down from his social high. I am actually fairly certain he is foaming at the mouth and going into seizures.

I am of course well acquainted with foaming mouth Errol. As is Kari, who probably is the most visibly affected by cray-cray Errol.

But as for the others who have joined? They are getting a crash course in everything Errol. The biggest incident came the other day, when Errol learned that the new NaNoWriMo site had launched. He was…enthusiastic to say the least. 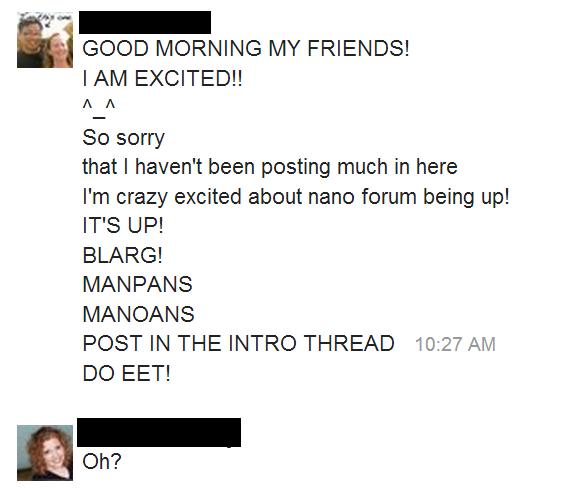 For ten minutes he will go insane with glee, screaming (in text form) hello to all who enter the chat, bombarding them with compliments and accusing them of slighting him all at the same time.

And then, just as suddenly, he will have to leave because he does actually work at his job. And we are left somewhat shell shocked in amongst a chat room of others with PTED (Post-traumatic Errol Disorder), unsure of what to say.

I know what you’re thinking. What’s the big deal? We’re all friends. We can chat.

Well, NOW we can chat alright. But before, I barely knew any of the people that Errol summoned to G-chat. It’s like being at a party where you get introduced to someone through a mutual friend but then that mutual friend sees a Totoro t-shirt and freaks out and leaves and then are left to drown in social terror as you try to make conversation. So often we would simply go back to work until Errol built up his excitement again. 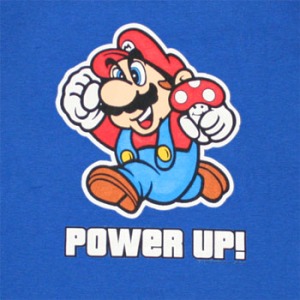 But after the initial awkwadness subsided, we all formed a rapport of sorts. It even led to the formation of our new club: The Princess Bride Knitting circle. Yes, this is a now a thing. Yes, Errol created it. But that is for another blog post.

Now the chat is open…most of the day…I am starting to wonder if there’s a single moment other than when he sleeps that Errol is not trying to contact someone. I even have my doubts with sleep though…

The weird thing though? those group chats have become my way of getting through the day. Which might be a sign that I need a new job if getting verbally assaulted by an insane extrovert and watching others get teased is my coping mechanism for a dull day…but then again, it’s good to start the day off on a much less murderish note.

At the very least, I have others now I may commiserate with! Welcome new friends! May we survive the Errol onslaught for years to come!

Posted on October 4, 2013, in My Neighbour Errol and tagged dog, google chat, my neighbour errol. Bookmark the permalink. 2 Comments.