Something interesting has been happening in video games lately.

You remember escort missions, right? In which you’re tasked with protecting some poor, helpless character for a level or, heaven forbid, the entire game? Sometimes they’re meant to be a sidekick who is supposed to aid you in the game but has clearly grown up with a very different definition of “aid”. 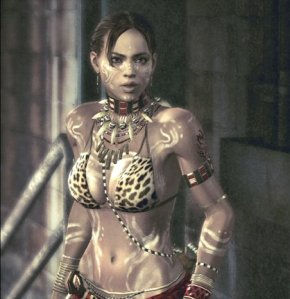 Sometimes they’re nothing more than human props who will go out of their way to walk into danger or in front of the monster that you’re desperately trying to shoot. 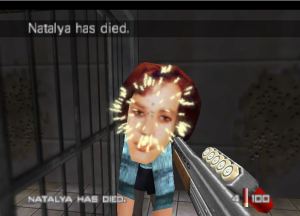 Whichever type they are, they are never fun to deal with. Whether it’s Sheva from RE5 or even just Yoshi running away from Mario at the merest brush of an enemy, escort missions often leave you yelling at the tv screen in a flurry of tears and frustration.

Until recently, that is. In the past year, there have been not one, not two, but THREE games whose focus is to protect a character and get them to safety.

All in the same year!

First there was Clem in the Walking Dead, the young girl whom befriends Lee at the beginning of the game and who sticks with him for the remainder. Admittedly, she isn’t a traditional escort mission as it’s an adventure game BUT she is a character the game wants you to want to protect.

How could refuse those eyes?

Then there’s Elizabeth in Bioshock Infinite, the teenage Steam punk Rapunzel who has the power to open tears in the fabric of the universe. You know, typical teenage stuff. The main character Booker is has been paid to find her and then bring her back to New York for mysterious reasons. 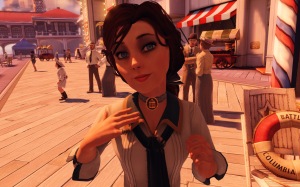 Finally there’s Ellie in The Last of Us, the 14 year old girl you are tasked with escorting and smuggling across a post-apocalyptic wasteland of the US for, once again, mysterious reasons. 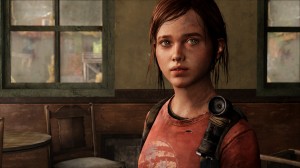 Her special power is having a back pack.

All of these games were massively successful, and all critics attributed at least part of their success to the three girls you spend the majority of the game with. So what makes them so different from past escort missions? What did the developers learn and change to make us want to protect them at all costs?

Well, I wouldn’t be writing this if I wasn’t going to explore it, so let’s take a closer look.

Now, being a kid doesn’t mean that you’re going to be less annoying. Far from it. Child characters run the risk of being the most annoying characters in any medium. They’re very difficult to write and extremely difficult to find competent actors to play them.

Ahem…although poor Jake Lloyd, he gets beat up on a lot.

BUT even if they annoy us we’d still feel bad about letting them die because killing kids is only slightly better than letting a puppy die. We’re also more willing to forgive them for being helpless. They’re kids after all, they’re not going to know how to shoot a gun or hunting tactics.

Although thankfully for these characters…

This one is crucial. Like, really crucial. Now, when I say useful, I don’t mean they have to fight your fights for you. They are still somewhat helpless. But even doing small things or showing an effort to help out makes it a little easier to want to protect them. We see they are trying, and as a result we feel more like a team.

Elizabeth is probably the best example of this. She will throw you supplies during your fight and open tears to give you cover. In fact you start to miss her when she isn’t around because you start to depend on HER a bit for getting you through a battle.

Seriously, how cool would this be?

Ellie might not have as much of an impact but she will alert you to where enemies are and will throw bottles and bricks at them to distract them while you get your gun ready. Not only that, but later when she does get a gun she has the power to actually take down enemies.

It’s only A LITTLE traumatizing

Clem is a bit more obscure, again because there aren’t traditional “battles” in the Walking Dead, but she makes herself useful in the story by offering to go places that are more difficult for the adult characters to reach. At first I was wary of sending a kid in, but then later in the game I wouldn’t even hesitate because I knew she was more competent than some of the adult characters I was with.

You know what the walking dead doesn’t have a lot of? Smiling.

Another way of being useful? These characters don’t die. Not really. Clem and Ellie have moments of danger where you can lose the game but other than that they are pretty safe from gunfire. Elizabeth is entirely safe altogether. And yet the great thing is that it still FEELS like they’re in danger. Not being constantly in peril increases their likeability tenfold.

But even if they were in danger, we’d want to save them because…

You know what escort characters are annoying? The ones who complain the WHOLE TIME. We need more than that. Did you ever have a friend that you stopped hanging out with because they constantly complain and drag the whole mood down? Well, the same thing can happen in video games. Only you don’t get a choice to leave them.

Sure, Ellie and Elizabeth complain. They’re teenagers, they’re snarky, they disobey you at crucial moments. But they’re also genuinely interested in the world around them. Ellie gets joy out of telling bad jokes and comics and is fascinated by the stories of what the world was like before zombies ate it.

Hint: there was less of this.

As for Clem, she could easily fall into the “teeth grindingly cutesy scared kid who screams and cries at everything” category, but she’s also enthusiastic despite the grim circumstances. When she DOES get scared or overwhelmed, it feels more natural. She’s a kid, of course she’s going to be scared! But she also doesn’t cower all that often. She’s willing to grit her teeth and put on a brave face even though she’s terrified, and that makes her all the more heartbreaking and endearing.

This is the most important one. Look, it’s all fine and good if your sidekicks and escorts aren’t going to be all that useful. They wouldn’t need protecting otherwise. But if that’s going to be the case, you’d darned well better make them likeable. In fact, escorts probably need MORE characterization than the protagonist would in a video game because we have to WANT to save them.

In fact, I’m pretty sure a lot of Bioshock’s budget went into making Elizabeth as believable as possible. The other NPC’s in the game have a noticeable lack of expression. They kind of appear wooden and awkward. Elizabeth, though? She has a HUGE array of facial expressions and is incredibly nuanced.

When it comes to Ellie and Clem, it’s their interactions which are key to learning more about them. Ellie will joke and sing rock songs while you travel, Clem clearly looks up to Lee and has some great heart to hearts with him,

More importantly though, they all have detailed backstories. We don’t hear their ENTIRE backstory of course, but you can tell that the writers went to great lengths to make sure they had a rich past.

All of these factors combined produce one result: when Elizabeth, Ellie or Clem are in trouble, you will stop at nothing to save and protect them. THIS is good game design. If we’re going to spend an entire game taking care of one character, they’d better make sure that character is someone we will care about.

Bioshock Infinite, The Walking Dead and The Last of Us are all amazing examples of this. Not only are all three characters detailed and likeable, but they also develop a complex and rewarding relationship with the main character.

Part of it I suppose is that there are a lot more parents out there now who play video games, and the Parent-child relationship would be very appealing and easily relatable for those that already have kids.

But it’d be nice to explore other types of relationships too. What about Mother-son? Or Mother-Daugher? Or Father-Son? Or siblings? Or friends? How would these games change if the protagonist became female? Or the escort became male? These are the kinds of questions that have been going through my mind and not ones I have the answer to yet. Because the fact of the matter is that all relationships are different, especially when you switch up genders.

Again, I’m not saying this as a full criticism. I love all of these games. But I think it’s something to consider for the future.

Regardless, these games have changed how we look at escort missions. And I for one am excited to see what comes next.