Canadian Capers: Night at the Wedding

Last September I and a small group of fellow escape room enthusiasts took it upon ourselves to create a large scale escape event that incorporated more story and interaction as well as puzzles. It was called Night at the Speakeasy and was a huge amount of fun. The feedback was so incredible that despite our exhaustion, we decided to make another event! It would be called Night at the Wedding and we decided on April.

It was, once again, a huge amount of work but so worth the effort. April 9th has come and gone and we honestly could not be happier with the results and the people involved. It was fantastically fun!

First, the plot: You receive a wedding invitation from your old co-workers Cassie and Calvin. You barely remember Cassie but feel compelled to go celebrate their union. Cassie loves puzzles and of course wants the guests to solve her puzzles before it’s time for the first speeches. But something seems off: there are guards all around. Calvin is slightly on edge. No one seems to know what’s going on…there’s more to this wedding than meets the eye.

Design wise, this was largely Errol’s show. He designed the puzzles and had to make sure everything integrated with the story assuming that the story made sense at all. The easiest way to describe his job actually is Artistic Director. He has a far more in depth blog of his process here. Me? Well, I’m going to talk about it from my own perspective: the writing support perspective!

There were a few big worries that we had. One was the potential for bottlenecks. Errol managed to spread out the puzzles which would disperse players more widely. Buuuut as our plot grew more complex bottlenecks could not be avoided entirely and two potential problem spots came up. Luckily we had the ability to send several groups through at once thanks to our awesome venue and Errol’s planning skills!

My main job this time around was to help figure out all of the background and supplementary information for the characters and plot as well as organizing the actors. It required a bit of research on my part which I personally found a lot of fun. Once again the there was far more background information written than was available to players. They only scratched the surface when talking to characters. I wish I could say more about it here but it would give away too many plot details.

There were lots of plot ideas that we wanted to try out but there was one that I desperately wanted to try out: I wanted a chooseable ending. Most people who read this knows of my love for Myst.

At the end of Myst, the player is suddenly confronted with a choice: they must choose a character to ally themselves with and set free. For twelve year old Manda and her friend, it was not an easy choice and it has been a gaming moment that has stuck with me forever. Since then I have become a story/choose your own ending junkie chasing game after game for as many branching story paths that I can find.

A couple of escape rooms I know of have dabbled in having a chooseable ending and the results were…mixed. Either it ended up feeling inconsequential or it made absolutely no sense. I will admit, it is tough. How do you get other players to care about a storyline when they are racing to complete puzzles within a time limit?

We were lucky in that regard. We had actors to interact with who could convey the story. In fact Errol designed the structure in such a way that players were required to find out more background information. This would hopefully engage players in what was going on around them and not just in the puzzles they were required to complete.

My friend Lyf and I hung out at the bar again. I love this photo. Guess what kind of character I play?!

But how to go about making multiple endings for our event work…there were a few things we had to ensure:

The choice, while interesting, should still be a simple one.

In my dream world, I would have a 2-3 hour event with complex plot twists and puzzles and an end choice that would require keen observation and clues to see the answer clearly. This was our first time employing anything like this though and we only had one hour to do so. It was important to keep the final part simple. The last thing we wanted was confused players wondering what on earth they had just played.

There had to be a physical piece of evidence that could link directly to the villain.

It could not be a moral or emotional choice (though that did not stop players from making the choice based on their own morals). The answer had to be something players could look back at and understand completely.

We played around with multiple items: photos, file folders, even sound files. Errol finally thought up something that worked incredibly well. If players found it and paid attention, the answer to who the villain was became obvious.

MAYBE ERROL WAS THE VILLAIN! I think that would be awesome

The final ending would have to be based on team votes.

On the one hand, it could potentially be disappointing for those teams that had actually won. On the other hand it streamlined the process and gave us more time to reset. It was a necessary evil but worked out well! Everyone seemed to enjoy the process.

Dan joined us for guard duty again! He was great at being assertive 😀

We figured that the choice would be obvious for anyone who found the evidence but one thing we did not anticipate was our actor being so convincing that players would choose the wrong choice even with the evidence right in front of them! It was awesome, actually and yet another example of how I should always take acting performances into account when writing anything.

In the end the multiple choice ending worked out very well and I could not be happier with it. We even got to enact a losing ending in which we all died. That was super fun. If there was just one thing I could change it would be to have more rehearsal time. This is especially true for the winning scenario. There were a couple of awkward moments in which the audience wasn’t sure if it had “ended”. Overall though it went extremely well.

Night at the Wedding was a huge improvement from Speakeasy in so many ways. Not that Speakeasy was bad. Far from it! But it was great to be able to learn from our mistakes and improve on the model we had created.

There are so many people to thank here:

Once again I am in awe of Errol and his skills. I can say that here because it’s my blog and there’s nothing he can do about that. He worked night and day to make sure the puzzles and the flow were the best he could possibly make them. His efforts showed.

We had a team that worked their butts off in securing the venue, managing the social media, getting costumes and props together and organizing people. I was thankful to have lawyers on our team to deal with all of the paperwork that had to be created (waivers and contracts, man….they’re tough). I was also incredibly thankful to have Ruby, who is actually an event planner and was integral for the event. Seriously, having someone to make all of the props, get the costumes, coordinate the entire day and just in general be willing to help in any capacity was a huge relief.

I am lucky I know talented people. Somehow they keep letting me drag them into our crazy projects and I could not be more thankful. Part of what made our event unique were the group of crazy characters that players got to interact with. They put up with my billion emails and put a great performance in! I hope I can work with them again in the future :D.

This time around we had a professional photographer, make-up artist and baker who made cupcakes for the entire event! It made so much difference to the immersion of Night at the Wedding. Those cupcakes were honestly the best I have ever tasted in my life. I know now for future shows that getting professionals to do what they do best is the only way to go. My cupcakes would have been from a box with icing from a can. 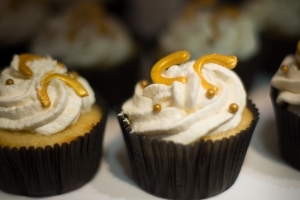 Loook at how awesome these look!

If I’m not begging my actor friends to be in my crazy projects, I’m begging my regular friends to stand around for eight hours and help run our event. There were some that even had to be a part of puzzles! We were grateful to have as much help as we did and if I win the lottery tomorrow my first task will be to rent a party boat and ivnite everyone who helped out…actually, my first task will be to pay off my student loan, THEN it’s to rent a party boat.

What’s in the future for Canadian Caper? At the moment…absolutely nothing :D. We are all tired and looking to rest. But we also had a ton of fun and are so proud of everyone involved! HUZZAH!

Posted on April 23, 2016, in Uncategorized. Bookmark the permalink. 1 Comment.