← My Dad
My Neighbour Errol: Language →

I’ve filmed a new Whitless Letter! And as usual, I’m going to use this blog as a chance to expand on my experience :D.

Now before I start tearing apart the game and before you feed me to the wolves for daring to speak against Lara Croft, I do want to make it clear that Tomb Raider is a fun game. Errol and I have been having a blast playing it, and it’s started to become our weekly ritual after we do our podcast.

For one, it’s very pretty. I only just got my PS3, but MAN, games just look so good on it! The art design is pretty fantastic to look at, from the grandest ancient temple to the smallest abandoned hut. And Lara’s hair? Man, it’s hypnotizing. 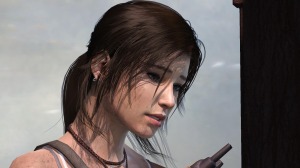 Look…you just zoned out for five minutes, didn’t you?

For another, it’s great fun to explore. You don’t HAVE to pick up all of the diaries and artifacts lying around. You don’t even have to explore all of the tombs. But it does add a lot to the experience.

And heck, the characters are also memorable. Maybe a bit clichéd at times (do all sea captains look like Captain Highliner?) but still fun and supplied with some decent voice acting.

No game is complete with a badass mentor.

As for Lara herself, she’s enjoyable and engaging. I’ve never played a Tomb Raider game until now, but I feel like this prequel works well in establishing just how this woman became the tomb raiding badass we all know and love. In this story, she’s afraid and vulnerable, but also has inner strength and a pretty good sense of humour.

But it’s also because of this characterization that a huge flaw in the game soon becomes apparent. The best way to describe it is through example.

Early on in the game Lara has been captured by shipwrecked hobo men. Tough situation for anybody, especially when you have no weapons and your hands are tied behind your back. It’s a very intense sequence. Just as it seems she’s going to escape, one of the hobo pirates gets a hold of her and is well on his way to killing her when she manages to grab his gun and shoot him in the face.

This is Lara’s first kill. Or at least, her first human kill. Not just in the game, but ever, in her life. This is made apparent to us in the cinematic where she stares in horror at the corpse and promptly begins to hyperventilate and vomit. It’s a heavy and important moment for her, one that clearly affects her.

That is, until she kills fifty more enemies with bullets not five minutes after said encounter. Suddenly the hyperventilating, in over her head twenty year old has turned into Girl Rambo. Wave upon wave of enemy come at her, pummelling her with gunfire. She barely blinks as she takes life after life and loots their corpses for supplies.

There are a couple of problems I have with this. For one, it conflicts with the character the game keeps trying to build for us. The cinematics and script tell us that this is an inexperienced college girl, one is emotionally overwhelmed with everything being thrown at her. But the gameplay tells a very different story. It shows a ruthless, trained killer, someone who is will not hesitate to shoot a man. 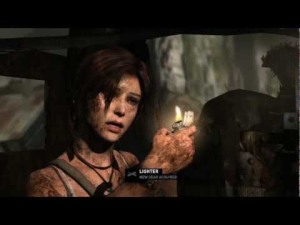 Also how to set them on fire….pretty psycho actually.

For that matter, Lara, the fresh out of university archaeologist, is somehow an expert at everything she encounters. The game tries to cover this up somewhat, referring multiple times to “training” she received from both her father and her mentor, Roth (who is with you on your journey). But this term is vague, and it can only cover so much given the character. Hunting animals? Sure. Use of small firearms? A lady’s got to protect herself, why not.

But it can only go so far before it starts to seem ridiculous. Does this training cover how to use a machine gun? Or a WWI vintage trench gun? Or how to modify them for more effective use? Lara’s knowledge of firearms seems to rival event he most fanatic member of the NRA. And what about medical prowess? She’s able to treat a leg that has been chewed and mauled by a wolf down to the bone, and chalks it up to her working at a bar stating “A wolf bite has nothing on a broken bottle”. Yes, yes it does. And you need at least SOME medical schooling for that.

I realize that there is some suspension of disbelief when it comes to video games. But it’s harder to buy with a character like this. Think about Nathan Drake in Uncharted (aka Video game Indiana Jones).

He does some unbelievable stuff too. But it’s established very early on that he is an expert at what he does. He’s been raiding tombs for years. He’s run into his fair share of scrapes. If he picks up a machine gun and begins firing away it’s easier to believe because it’s been hinted that he’s probably had to pick one up before.

Lara is supposed to be new at this. She’s supposed to be inexperienced. She’s young and has had this “training” but according to the script nothing has truly prepared her to deal with a cursed island of pirate hobos and run by an…angry weather god queen?…I haven’t finished the game yet, so that’s still up in the air.

I do know she had some pretty awesome palaces.

To be fair, going the “inexperienced greenhorn learns to be a badass” is a difficult road to go in video games. It’s a shooting game after all. She IS going to have to shoot people. But this brings me to the next problem.

None of the shooting matters.

This has to be the most densely populated cursed island I’ve seen in a long time. There doesn’t seem to be any shortage of men who want to murder you. It gets to the point where after a while I couldn’t help but wonder whether ships were getting wrecked on an hourly basis because there didn’t seem to be any end to the enemies (and Uncharted is also a culprit of this).

As a result, the strategy to winning these battles is “shoot at everything that moves” and the impact of this young woman taking lives is significantly diminished. There are tons of bullets lying around, you can even salvage them from bodies you’ve already shot. It gets to the point where it’s not a big deal to shoot your way through a massive army of hobo men because you just fought one five minutes ago and you’ll have to fight another one in the next ten minutes.

Armed men having nothing on a girl with a tank top.

It’s not so much the violence, but more that the choice to go the violent route does not matter. There’s simply no weight to it. I’m not just talking about the moral choice either. I’m talking about the tactical choices. Shooting guns in Tomb Raider has no consequences. There are stealth sequences, but there’s no need to bother with them for more than the minimal amount of time, because shooting is simply easier.

Never was this more apparent to me than when I started playing “Last of Us” this weekend. In this game, every single bullet is precious. You can’t carry that many and when you do find them, sometimes it’s only one or two at a time.

And after that, there’s lots of zombie punchin’

You can also craft items from random supplies you find, but sometimes WHAT you decide to craft is a hard decision. For instance, the same ingredients needed to make a health kit can also make a Molotov cocktail. Do you use those supplies for weapons that will be extremely effective in killing your enemies or do you use it for a health kit and rely on other means to get out of tough situations?

Because of this, the fighting is a lot more tense. Stealth is harder in terms of time, but shooting also alerts other enemies of your position. Melee weapons don’t last that long. It takes time to use a health pack and leaves you vulnerable to attacks.

So far there have been, maximum, maybe ten enemies to deal with at a time (some of them zombies). It takes just as long and sometimes FEELS more difficult to defeat them as a room full of fifty men does in Tomb Raider. The decision to use your bullets is an important one and you can feel the character’s stress as the supplies run low. Sure, you’re not going in guns blazing, but it still makes for some very exciting gameplay.

This zombie is TERRIFYING.

I do understand that the point of some games is to take down swarms of enemies in the most bloody and badass way possible. I understand that it’s entertainment, that for a few brief moments you get sucked in and feel like a god. I just think it was a mistake to try it out with Tomb Raider given the character and world the developers presented us. Lara Croft is a twenty year old student, not Kratos.

He clearly needs a tank top.

And you know what? At first, the game succeeds. You’re tied up. With no weapons. You have to sneak past an army of men who will kill you the second they see you. There’s no combat, but it is an incredibly intense part of the game. But it’s not long after that before you’re happily pummelling everyone you come across.

Give Lara more of a progression. If you want this to be a clean slate for the character, don’t make her an instant expert. Have her struggle in her aiming at first. Heck, don’t even give the enemies guns. This is a deserted island, bullets would be far more scarce. Not every ship that crashes would have crates of them lying around in their hold. Have her knock out enemies, not murder them. Prolong giving her a gun so that when she gets it, when she starts to get used to it, it’s a bigger deal.

Also, if you’re going to have her jump like a gazelle maybe hint at some sort of gymnastics background because JEEZ some of those jumps looked impossible.

← My Dad
My Neighbour Errol: Language →