So I was listening to the radio the other day and a memory was triggered and I thought it’d be fun to do a blog post about it. In face, I thought I’d start a new series of childhood memory blog posts. Here’s the first one! Fun!

When I was a kid, my mom loved figure skating. She loved following all the competitions on tv. She loved the costumes and spins. She loved watching Kurt Browning and Elvis Stojko.

Naturally once my sister and gained the ability to walk without clinging to chairs, she decided to sign us both up for figure skating lessons. Like all parents, she was hopeful that her daughters would share her passion and embrace it.

This isn’t me skating, but this was how I felt about it even as an infant.

I hated the discomfort and tightness of the skates. I hated the constant chill of the arena. I hated the sound of metal scraping ice (I still do). I hated how soaked through my tights got from constantly falling. I hated doing bunny hops. I hated that one snobby girl who always got licorice after practice.

How I coveted this as a kid…and as an adult…

Once, I peed on the ice. Because I was too shy to say WHY I had to leave the rink. My instructor thought I was trying to get out of the lesson so apparent was my dislike. Imagine that. Not just the humiliation, but just how awful wetting yourself feels in a cold rink.

And of course there was my complete lack of co-ordination. At first it was considered cute. If you’ve seen any dance recital, figure skating or sport involving five year olds you know what I’m talking about. It doesn’t matter what they’re doing up there. As soon as they start flailing about there is a collective “awwwwww” from the gathered crowd.

Are ANY of them doing the same thing? Doesn’t matter. Cause tutus.

But there comes a point when people stop saying “that’s adorable!” and start saying “That child has issues…” as they watch a blond pig-tailed girl sail into the boards because she still hasn’t figured out how to stop by herself. Soon it became a weekly exercise in humiliation as I struggled to keep my balance let alone do a decent spiral, all the while feeling like my ankles would snap.

See this? See how badass it looks? I didn’t do that.

Then there was the carnival. Every year the skating club would have a showcase of all of their skaters. There would be a guest star (one year it was in fact Kurt Browning). We would get costumes and learn routines. It was a big three day event that all the skaters anticipated.

Every year I hoped for a cool costume. I watched girls walk away with Ariel, or an Arabian Princess (Aladdin hadn’t come out yet), or fairies and desperately wanted to be included with them. 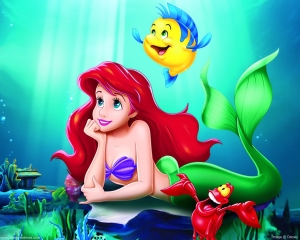 I may have had a SLIGHT mermaid obsession…

I did not get to be Ariel. Or a Princess. Or even Raggedy Ann.

I got to be Miss Piggy.

I don’t have a picture of this…but here’s the version I had to be.

Note the uninterested stare and the big gaps in the teeth.

And, my last costume, Popcorn. 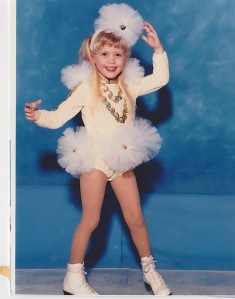 The camera guy made me smile. Note the straight hair. That used to be natural. But the universe had other plans. Also note the bent in ankles…

The only cool part about Popcorn was that I got to skate to this song:

I did this for three years. But keep in mind I was not forced to. My mom, despite her hopes, was not one of those parents who makes their kids live out their unrealized dreams. Every year my mom asked me if I wanted to continue. And every year I said yes. So why would I continue this torture, knowing that I would hate every moment of it?

Because of the tunnels.

Underneath the seats of the Point Edward Arena is a tunnel that connects the back-stage and dressing rooms of the rink to an entrance onto the ice. It was lit by bare bulbs. The floor was covered in cardboard to accomdate the series of sharp blades crossing the path. In all honesty, it probably looked like this:

But to my seven year old brain, it looked like this:

Walking through those tunnels were the highlight of my career. It was a trip into a great realm of mystery. Would we see a ghost? A monster? Would we cross over into another world and have a grand adventure? Were there hidden relics and mysteries to solve? There was no end to the possibilities. I wanted to spend my entire life exploring them.

And the only time I could ever go through them…was during the carnival.

All the cold, all of the bunny hops, all of the trips and falls, all of it I endured because at the end of the year I would get my tunnel trip once again. Forget the actual routines, forget the costumes, it was all about the tunnels…okay, the costumes were cool. Just not mine.

Seriously, why couldn’t I have ariel?!

In the end though, I finally gave it up and lost access to my beloved tunnels. I think the Popcorn was the straw. Or maybe it was Piglet. To be honest, I’m having a hard time remembering what came first.

My poor mom. I am not a parent, but I can imagine the series of compromises they go through as they realize their child will not necessarily love the things they love. Luckily for her, she had another daughter who was co-ordinated and would watch the Olympics with her and also enter competitions and win prizes.

As for me, I missed my tunnels. I miss them still. But in a way it’s good. If I were to visit them again, they would lose that magic. And I do know this for sure. If you’ve ever been to the ROM (Royal Ontario Museum) you’ll see that they have a bat tunnel/cave you can walk through. I went back as an adult and it was far smaller and far lamer than I remembered. 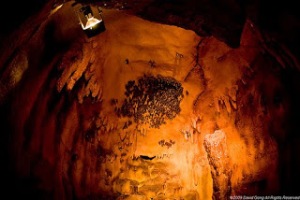 This is the coolest photo of it I could find.

So I’m good to leave my tunnels as an epic adventure. So long tunnels. You were worth the itchy tights.